Situated in southern Queensland, Australia, Sunnyspot Farms manages 5,000 avocado trees spread out over 30 hectares. Specialising in Hass avocados, the farm is home to trees ranging in age from two months to 30 years. Owners Daryl & Sally Boardman purchased Sunnyspot Farms in 1996 and have expanded their operation every year since.

With the avocado becoming all the rage in trendy restaurants across the world, Sunnyspot Farms has seen a desirable increase in consumer demand. “It's going gangbusters thanks to the smashed avo craze,” says Tyson Cross, Farm Manager at Sunnyspot Farms. “We've been very lucky with production.” The farm markets and distributes to Australia’s largest supermarkets, including Coles and Woolworths and runs smaller exports to Singapore and Malaysia which they are looking to expand. They manage harvest in house and oversee some contract farming on the side. Seasonally from February to October, they run Sunnyspot Packhouse where employees pack ample amounts of fruit from the Bundaberg area. 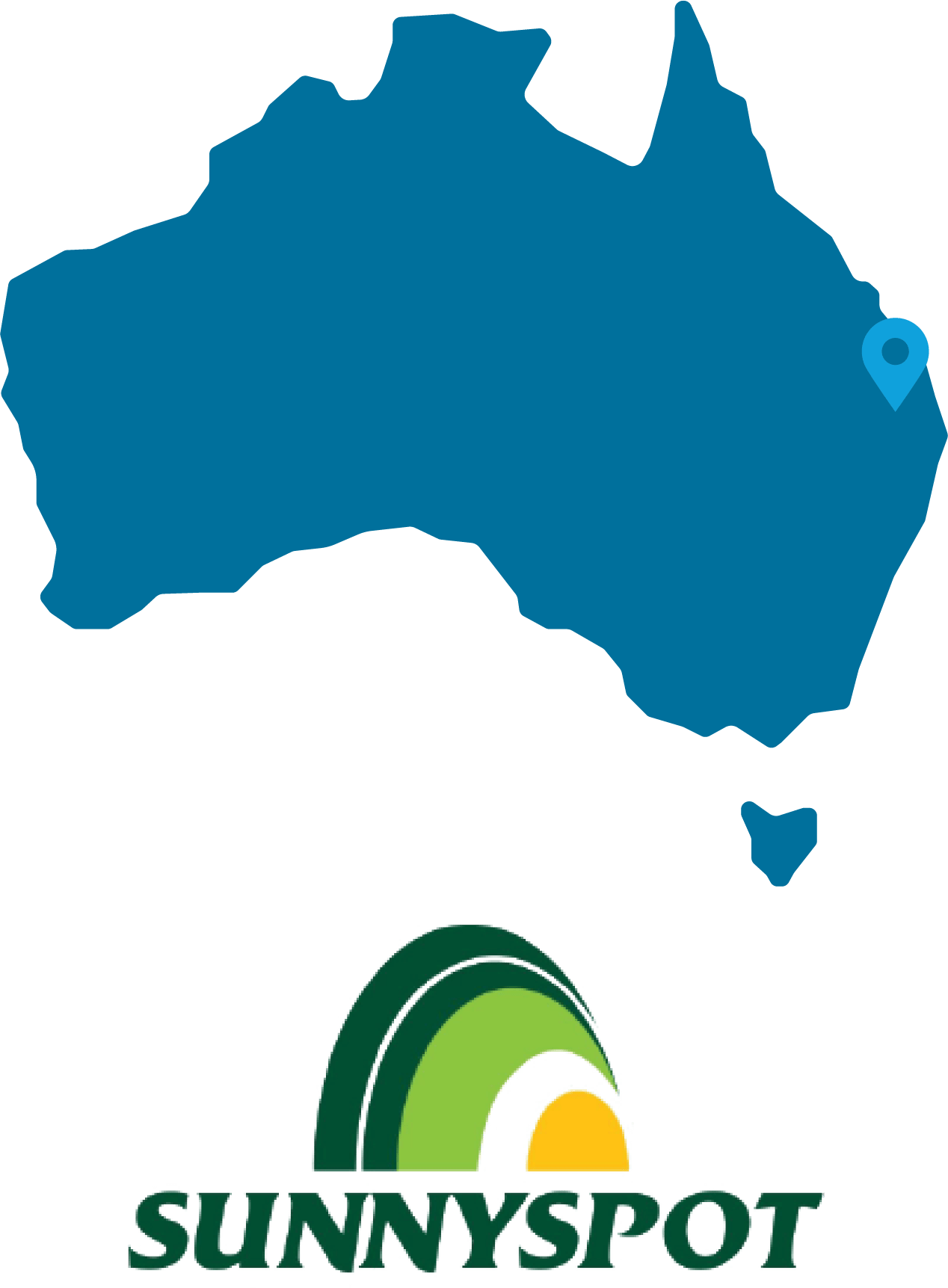 Before adopting Conservis, Sunnyspot Farms grew frustrated with input and field records going missing. The farm once used another software program which was Microsoft Access based to manage their business. “We found there was a lot of double entering and triple entering [data],” states Farm Manager, Tyson Cross. “Prior to Conservis, basically our spray diary was a spreadsheet and if it didn't get done by somebody, it disappeared. That input was lost.” Tyson was frustrated by not knowing how much chemical or fertilizer was used on specific blocks.

“So we searched [for] a long time for a program like Conservis,” explains Tyson. After adopting Conservis in 2018, Tyson has noticed a shift in the way the operation conducts business. Today, the farm is growing and growing strong.

Tyson uses his operation’s data to drive his thought process. Ultimately, the more information that Tyson has, the more confident he is about managing the farm. Tyson thinks about observing his farm’s data. “We were very high on fertilizer for this block and it only yielded five ton a hectare. What happened?” questioned Tyson. “And then we'll go across to a 27-ton hectare block and compare them.” He attributes this ability to be a massive win for the farm.

“It's all data-based and the big thing about Conservis is we know exactly how much we've spent on a block at any minute of the day.”

Tyson believes the leaders at Sunnyspot Farms have a strong vision for the company and they are not afraid to try new things to keep the operation ahead of the game. “We want to be able to produce a lot of fruit that's of high quality,” he says. Conservis helps Sunnyspot Farms by tracking all associated costs to grow a crop. Tyson appreciates that Conservis shines a light on what the operation spends, allowing them to keep a keen eye on profit margins.

When it comes to cost tracking, Conservis provides the big picture but it also allows you to drill down and really understand your operation at a block level. “We can get it down to a per tree [level],” says Tyson. “And in the pack house we can get it down to per tray [level].” Knowing precisely what it costs Sunnyspot Farms to produce each tray of Hass avocados allows the farm to stay competitive. “It is a very fine detail. Previously, there's no chance in hell we'd been able to do that.”

Recordkeeping on every farm is growing more critical by the day. Something so seemingly basic is oftentimes a real headache for producers and prior to Conservis, Tyson was no exception.

Since 2018, however, Sunnyspot Farms has gotten their field records and their farm’s data under control. Today, Tyson feels supported by Conservis’ farm management system which was created with farmer ingenuity built into its DNA. “The day-to-day recording of any block activity work... it's been a big game changer for us because prior to Conservis, no one had a clue what was going on.”

“I love it because it limits my paperwork. By the push of a button, the jobs, the recording of data is done. It's been a godsend.”

“The good thing about Conservis being cloud-based... we have a lot of areas on our properties where the phone reception is very limited. The beauty about it, once the ticket is started, it stays with that phone and it'll upload in the back office when the staff get back into a mobile-friendly area. So there's no information lost, which is a really big thing on our farms.”

“Traceability for consumers is going to be a huge part of our production in the coming years,” says Tyson. This global trend is taking place around the world today and it’s only expected to grow. The more data an operation can show behind the way our food is grown, the easier it is to remain compliant, transparent and ultimately build trust with stakeholders and consumers alike. It’s a win-win scenario and it’s something that large scale producers are focusing on.

“Traceability is a really big, important part of our business and Conservis enables us to provide that information to whoever.”

“Consumers want to know where their fruit's made, where it's come from. Conservis enables us to provide that traceability to stakeholders that require that information, whether it be Freshcare or a veggie boy at Rocklea markets.”

Conservis provides harvest traceability back and forth between the farm and the packhouse, helping to connect two entities. “It's made life easy," explains Tyson. “You can pluck out what your highest performing blocks were and it's detailed in the reports. All in all Conservis has helped us… we've come a long way since we've installed the program.”

Every field worker has the Conservis app installed on their mobile phone or iPad. “I'll start the work order, which we can designate to a particular staff member,” says Tyson. “They log on, check their daily tasks, hop in the tractor and start that job which records the start time.” From there, Conservis marries up any associated costs for labor, machinery and every cost associated with that particular activity, including weather data. “We can generate a work order from the back office, but for 80% of our operation, the guys do what we call an ‘ad hoc ticket,’” states Tyson. This is one of Tyson’s favorite things about Conservis and the farm uses this when things don’t go as planned, allowing each field worker to create a work order on the fly and move forward without hesitation.

“I like the ad hoc ticket for the guys doing a job on the run. It enables them to record their times without a paper timesheet, and enables us to track what it costs for that day, how much our labor was, how many labor hours we used on that day.”

The efficiency gains of using one mobile app to communicate and view field work status is a big win. Not only does Conservis’ mobile app show each field worker what to do, but it sends that real-time activity information to the back office straight away, keeping the office managers fully informed as to what’s happening on every block.

When questioned on whether it was difficult to get the field workers trained on Conservis’ mobile app, Tyson says, “Not overly, it was pretty good. We had some good [Conservis] trainers, and it was a very smooth transition.”

Australia’s food production system is highly regulated and quality is a top priority at Sunnyspot Farms. “Selling fruit to the big supermarkets in Australia, we have to comply with a Freshcare order, which happens every year,” states Tyson. Freshcare is an industry-owned food safety and quality assurance non-profit designed to benefit suppliers and customers alike. “With Conservis’ farm software management program, that helps us digitally record and provide the necessary reports to Freshcare by pressing a button.” Tyson is in full support of Conservis, especially as it helps address the mundane task of compliance reporting into something more simple.

“Conservis has probably saved us 100 hours in labor for Freshcare.”

“On the reporting side of things, I can look up how many dollars per hectare was spent to date in that current crop year. Historically, I can go back to when we started with Conservis [and] compare the years to date.”

Another win is Tyson’s ability to share any Conservis report with his stakeholders at any point in time. Keeping the full team in the know is simpler using Conservis reports. “We like the block activity report, which gives us an average, [showing] how much per hectare has been spent up to that date in the current crop year.”

“The recording and capturing of live weather data for a spray ticket is a big bonus.” Tyson is grateful that Conservis takes the guesswork out of accurately recording weather data while spraying the avocado trees. “It takes the human error side of things out of the equation, so it gives us real-time recording which is a big part of the Freshcare spray diary requirement (capturing weather data).”

“Every farm is different. Every business is different,” says Tyson. We know this to be true after spending over a decade listening to farmers from around the world. Since no two operations or years are alike, Conservis was designed with flexibility in mind.

“When we first started, someone was in the car and out here within two hours. The phone support's been unreal... you invest a bit of money in the program, but the support is what backs it up.”

“We might have an idea of what we want the Conservis program to look at. We'll call the Conservis guys, have a chat about it. ‘What do you think about this?’ They'll talk to the powers that be and in two, three months, it's put into place. So that's the one good thing about the program is the adaptability for change. It's not just, ‘Here you go. Here's your program. We'll see you later.’ It's forever changing and tailored to our business, which we spent a long time looking for and I think we've found it.”

Is Conservis right for you?

Let's start with a conversation.